Of Those To Whom Much Is Given, Much Is Required

'Jesus said, “It is as if a man, going on a journey, summoned his slaves and entrusted his property to them; to one he gave five talents, to another two, to another one, to each according to his ability. Then he went away. The one who had received the five talents went off at once and traded with them, and made five more talents. In the same way, the one who had the two talents made two more talents. But the one who had received the one talent went off and dug a hole in the ground and hid his master’s money. After a long time the master of those slaves came and settled accounts with them. Then the one who had received the five talents came forward, bringing five more talents, saying, ‘Master, you handed over to me five talents; see, I have made five more talents.’ His master said to him, ‘Well done, good and trustworthy slave; you have been trustworthy in a few things, I will put you in charge of many things; enter into the joy of your master.’ And the one with the two talents also came forward, saying, ‘Master, you handed over to me two talents; see, I have made two more talents.’

His master said to him, ‘Well done, good and trustworthy slave; you have been trustworthy in a few things, I will put you in charge of many things; enter into the joy of your master.’ Then the one who had received the one talent also came forward, saying, ‘Master, I knew that you were a harsh man, reaping where you did not sow, and gathering where you did not scatter seed; so I was afraid, and I went and hid your talent in the ground. Here you have what is yours.’ But his master replied, ‘You wicked and lazy slave! You knew, did you, that I reap where I did not sow, and gather where I did not scatter? Then you ought to have invested my money with the bankers, and on my return I would have received what was my own with interest. So take the talent from him, and give it to the one with the ten talents. For to all those who have, more will be given, and they will have an abundance; but from those who have nothing, even what they have will be taken away. As for this worthless slave, throw him into the outer darkness, where there will be weeping and gnashing of teeth.’”

The parable that Jesus offers in this week's Gospel, which is one of his last public teachings prior to his arrest and crucifixion, is often called the Parable of the Talents.  Stop me if you’ve heard preachers prop up this parable during stewardship season, encouraging members of their churches to not be like the third servant who “wasted his talent.” 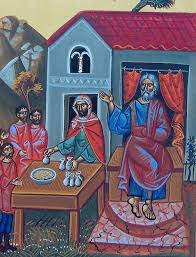 An eastern icon of the so-called Parable of the Talents.

I’d like to think that the parable could better be described as the Parable of the Third Servant; I know that doesn’t have quite the same ring to it, but the talents piece isn’t really that important; talents here is a currency, and in Luke’s version of the story Jesus instead uses denarii as the currency in the parable.  The talents are only important in so much as a talent was an astronomically large sum of money: one talent equaled anywhere between 15-20 years of wages for a regular laborer.  That amount of money is laughable—which is a technique Jesus regularly employs in his parables because he has a sense of humor; remember that the Gospel is at its heart, hilarious.

So let’s look at the actions of these three servants.  What is the motivation of the first two?  It’s to mirror the actions of their master, to do what he would do, which is why they take the money he gives them and invest it.  But the third servant is motivated by fear of his master. He sees him as immoral, a taskmaster, and so the master becomes what the servant fears.  This is a parable not meant to instill fear in people’s hearts—don’t waste what God gives you or you’ll be thrown into the darkness—rather it is a parable warning against giving in to fear.  If fear is what we imagine, if that is our motivation, then that is how we will see and experience God; after all, God may have made us in God’s image, but very often the opposite is also true.

Fear was at the heart of Jesus’ final teachings in the days leading up to his death. It was fear that kept the religious authorities from hearing Jesus: fear of change, fear of self-awareness, fear of losing what they had, especially material wealth and earthly power.  Certainly, the Parable of the Third Servant speaks to material wealth, for those of us in positions of privilege, as those authorities in Jesus’ time were, we must be ready and willing to use what we have;  Dietrich Bonheoffer put it this way, “The sin of respectable people is running away from responsibility.”

But every person has a responsibility to use what is given to them, whether privileged or not.  This is what the parable is about.  The third servant doesn’t have as much as the other two, but he is still expected to do something with what he has been given. In other words: of those to whom much is given, much is required.  Even those in Jesus’ crowds who heard this parable, most of whom were the poorest of the poor, could understand that this teaching was about more than material possession.  What had God given them? Was it fear?  Or was it grace?  Whichever one they experienced would be the one their lives would reflect.

One community that experienced fear and had a hard time figuring out what to do with what God had given them was the church in Thessalonica.  This bunch was poor not only in the material sense, but also so much so in the spiritual sense that Saint Paul had to write to them twice!

We have heard from I Thessalonians for several weeks now, and to sum up what was going on for this early Christian community: everyone was convinced that Jesus was supposed to have come back already—remember this letter was written roughly 20 years after Jesus’ resurrection and ascension.  When Jesus had not come back everyone got super stressed out:  “What are we supposed to do now?” they asked, “What’s the point of any of this stuff?”  and “If he hasn’t returned, even though he said he would, does that mean we were all wrong?”  You can imagine how fearful they must have been.  How does Paul respond?

'Now concerning the times and the seasons, brothers and sisters, you do not need to have anything written to you. For you yourselves know very well that the day of the Lord will come like a thief in the night. When they say, “There is peace and security,” then sudden destruction will come upon them, as labor pains come upon a pregnant woman, and there will be no escape! But you, beloved, are not in darkness, for that day to surprise you like a thief; for you are all children of light and children of the day; we are not of the night or of darkness. So then let us not fall asleep as others do, but let us keep awake and be sober; for those who sleep sleep at night, and those who are drunk get drunk at night. But since we belong to the day, let us be sober, and put on the breastplate of faith and love, and for a helmet the hope of salvation. For God has destined us not for wrath but for obtaining salvation through our Lord Jesus Christ, who died for us, so that whether we are awake or asleep we may live with him. Therefore encourage one another and build up each other, as indeed you are doing.'

You are not in darkness, Paul says, you belong to the day—this is a reference to the cult of the Greek god Dionysus which was prominent in Thessalonica and often met for their rituals in the middle of the night.  Because you’re not part of this dark, secretive cult, you should encourage one another and build up each other.  Yes, you think Jesus should have been back by now, but he’s not, so now what do you do?  Hold on strong, he tells them! God is still with you, even if God isn’t there the way you think God should be.  Use what God has given you:  each other!  Be the Church together!  As long as you are together, you will face whatever comes.  Rather than living in fear because Jesus hasn’t come yet, live in the grace that Jesus has already given you, and all manner of things will be well.

Matthew’s Gospel hadn’t even been written yet, but maybe Paul got word of this parable somehow because his point to the church in Thessalonica is the same point Jesus was trying to make in his final teachings:  if you let fear be your motivation, then you will not only be afraid of God but you will die spiritually, but if you trust what God has given to you—whether it’s a bajillion talents or just one another—you’ll make it.

So now what do we do?  Do we let fear wreck us, holding us tight and keeping us stuck in ourselves?  Or do we heed Paul’s words to the Thessalonians to keep building one another up?  Do we heed Jesus’ words when he urged the people to not let their fears of what God could do prevent them from taking a risk with what God had already given them?

The religious authorities of Jesus’ day and the Thessalonians in Paul’s day forgot—and most of us in our own day still forget—what God has given to humanity:  we focus so much on the material and lose sight of the gifts of God’s everlasting presence of grace and one another.  Yes, the world is a fearful place right now, absolutely, and fear is mighty powerful!  It keeps us from being brave, like it did to the third servant in the parable. It fills us with dread when things don’t work out the way we expected, like the Thessalonians.  Fear is the voice inside that keeps us from blazing a trail because the well-worn path seems safe and so inviting, to paraphrase the playwright Jonathan Larson.

If we hold onto fear then that is all we will see—a God, and a world, meant to be feared. But fear lives in the dark, in the secret places of our souls, and we are not children of the dark but of the day.  The grace of God is sufficient, as it was then, so now, and ever shall be, world without end.  We have all been given that grace, that presence, and we’ve given one another. What happens to the Church, to our country, and to our world, depends on what we do with those gifts.  Of those to whom much is given, much is required.