Lessons From the (Current) Apocalypse

'Jesus said, “In those days, after that suffering, the sun will be darkened, and the moon will not give its light, and the stars will be falling from heaven, and the powers in the heavens will be shaken.

Then they will see ‘the Son of Man coming in clouds’ with great power and glory. Then he will send out the angels, and gather his elect from the four winds, from the ends of the earth to the ends of heaven.

“From the fig tree learn its lesson: as soon as its branch becomes tender and puts forth its leaves, you know that summer is near. So also, when you see these things taking place, you know that he is near, at the very gates. Truly I tell you, this generation will not pass away until all these things have taken place. Heaven and earth will pass away, but my words will not pass away.

“But about that day or hour no one knows, neither the angels in heaven, nor the Son, but only the Father. Beware, keep alert; for you do not know when the time will come. It is like a man going on a journey, when he leaves home and puts his slaves in charge, each with his work, and commands the doorkeeper to be on the watch. Therefore, keep awake—for you do not know when the master of the house will come, in the evening, or at midnight, or at cockcrow, or at dawn, or else he may find you asleep when he comes suddenly. And what I say to you I say to all: Keep awake.”'

Happy New Year!  No, I’m not early, it’s a new year, as far as the Church is concerned.  Rather than starting on January 1, the Christian calendar begins in late November and/or early December with the season of Advent, the preparatory time before Jesus’ birth at Christmas.  So, however you responsibly choose to celebrate New Year’s, do so today and say a prayer that the next year is a lot better than the last!

But we don’t start our New Year with joyful words from Jesus or a story about his mom and dad in the days before his birth, instead we start with language that is, is in a word, apocalyptic.  “In those days,” Jesus says to his disciples just a few days before his death, “the sun will be darkened, and the moon will not give its light, and the stars will be failing from heaven, and the powers in the heavens will be shaken…then they will see the Son of Man coming in the clouds with power and great glory.”  Not exactly language we would use to express the hope and excitement of a new year, is it?  But while Jesus’ words might not seem very festive in this holiday season, they can help us understand what has been going on in our world this past year and might even offer us some much-needed good news. 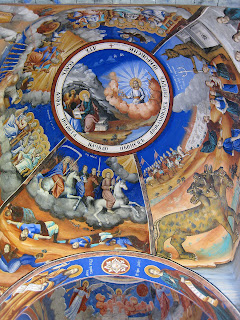 The image featured on the 'Apocalypse' entry page on Wikipedia.

I mention that Jesus’ words from our Gospel reading this week are apocalyptic. That’s a word that often conjures up images of pestilence and plague, famine and disaster, warfare and locusts.  Come to think of it, that kind of sounds like what we have been experiencing, doesn’t it:  an actual plague, more natural disasters than ever recorded for a single year, armed conflicts in Armenia and Ethiopia, and the surge in popularity of authoritarianism here in America.  Oh yeah, and actually locusts!   Some have wondered:  has 2020 been the apocalypse?

Well, no, it’s not THE apocalypse, but it is AN apocalypse.  You see, the word apocalypse simply means “revealing,” so in a very real sense, 2020 has been apocalyptic because it has revealed much about who we are, and a good bit of what has been revealed hasn’t been pretty.  Apocalyptic literature, then, is less about telling the future and more about revealing what is going on in the present moment; Jesus himself makes this clear after his own revealing statement about the coming of the Son of Man: “about that day and hour, no one knows, neither the angels, nor the Son, only the Father.”

The revealing that Jesus’ words offered to Mark’s audience the chaos of what life was like for people after the destruction of the Temple in Jerusalem, which had just happened around the time Mark’s Gospel was written.  People were in a panic, thinking that this was it, this was when God was finally going to break through and end it all.  Jesus’ words, then, remind them that are to stay awake and be ready, but that no one will know when that day of fulfillment, which we also call the eschaton, or the day of resurrection, or the second coming, will actually arrive.

What about us, though?  Do Jesus’ words reveal something for us during this year that has been, in more ways than one, apocalyptic? I believe so because, to paraphrase one theologian, when properly unpacked apocalyptic texts provide us with a powerful resource for staying grounded in our faith in the midst of social upheaval.  Jesus’ words to his followers to stay awake, or as Preston Epps puts it in his translation of Mark’s Gospel, “to make a practice of staying awake,” is good news for us.

Consider the notion of staying awake and think about the growing use of the term “woke.”  There was an article written back in 2017 entitled the ‘Six Degrees of Wokeness.’  It’s become sort of cliché in the past year, but with regard to issues pertaining to social justice, especially the fight against racism, we all need to do the hard work of becoming more and more woke; that is, being mindful of the systems of racism that we participate in and then actively working to dismantle them.  Being “woke” isn’t a destination we reach, it’s a practice we develop, much like what Jesus is saying to his followers

What Jesus’ words also offer—and what all apocalyptic literature including the Book of Daniel and the Revelation of John also offer—is the promise of a day when the truth about the world will be fully revealed.  This is what Jesus is speaking of when he describes the coming of the Son of Man—a line lifted word-for-word from the Book of Daniel.  There will come a day, when all will be revealed, when the world will be fully and totally transformed by the power of God’s love and mercy.  Until then, though, until that big apocalypse, that big revealing, we have moments like these, these little apocalypses, if you will.  The term we often use is “already-not yet.”  Jesus has already revealed himself to the world, but the grand revealing has not yet come.  It is this revealing for which we wait.  This season of Advent, then, is not just about waiting for Jesus’ birth, but also waiting for that grand revealing, that big apocalypse.

We may not know when it’s going to happen, but like Jesus says, we can monitor the signs all around us, and we can learn from them.  We can observe the reality of the plague of COVID and do all in our power to slow the spread by wearing our masks, keeping our distance, and being vigilant in calling others to do the same.  We can have ears to hear the cries for justice and commit to a practice of staying awake, for the purpose of building a society where the freedom and dignity of all people are respected and upheld.  We can read the apocalyptic signs all around us and prepare not only our hearts for Jesus to be born anew, but prepare our whole world for the revealing of God’s love and mercy that is to come.  What better way to start the new year than to learn from the old one and allow God, through all of the little apocalypses that we encounter, to transform ourselves and our world.  Happy New Year, and welcome to Advent!