'When the Pharisees and some of the scribes who had come from Jerusalem gathered around him, they noticed that some of his disciples were eating with defiled hands, that is, without washing them. (For the Pharisees, and all the Jews, do not eat unless they thoroughly wash their hands, thus observing the tradition of the elders; and they do not eat anything from the market unless they wash it; and there are also many other traditions that they observe, the washing of cups, pots, and bronze kettles.) So the Pharisees and the scribes asked him, “Why do your disciples not live according to the tradition of the elders, but eat with defiled hands?” He said to them, “Isaiah prophesied rightly about you hypocrites, as it is written,

‘This people honors me with their lips,
but their hearts are far from me;


in vain do they worship me,
teaching human precepts as doctrines.’


Is there a musical with a better opening number than Fiddler on the Roof?  Apologies to anyone who may not have seen this classic either on stage or film.  Set in the Russian Jewish town of Anatevka, the story centers around the local milkman Tevye and his family as they deal with the changing times.  They keep the balance in Anatevka, Tevye says, and how do they do that?  Tradition!  The score then swells into the show’s first song, and we hear the ensemble echo Tevye:  TRADITIOOOOON!!  Tevye tells the audience that in Anavatevka they have traditions for everything:  how to eat, how to sleep, how to work.  But my favorite moment in the number is when Tevye says to the audience:  “You may ask, ‘How did this tradition get started?’  I’ll tell you….I don’t know!”  Rarely have I ever come across a show that pulls me in and makes me love it before the opening number is even finished, but that’s what Fiddler on the Roof does with ‘Tradition,’ the name of that opening number.  Click below to watch the full video of the song at the beginning of the 1971 film.

Traditions are wonderful.  They bind us together with our ancestors.  They remind us that we are part of something so much greater than ourselves.  For us Anglicans tradition is one of the pieces of the three legged stool on which our faith is grounded—the other two being Scripture and reason.  When we are faced with an issue about how to worship or what decision to make we very often ask what our ancestors did, and that answer informs what we ourselves will choose to do.  But if we cannot answer that very important question that Tevye poses—How did this tradition get started?—we run into trouble, as Tevye himself does throughout that story.

The keepers of the traditions in Jesus’ days were the Pharisees, tasked with not only keeping the Law of Moses—the Torah—must also maintaining the traditions of their ancestors that grew out of that Law over time.  So often we like to paint the Pharisees as stuffy know-it-alls who were more concerned with legalism than they were an authentic relationship with God.  They have become something of a caricature to modern Christians.  And while many of the Pharisees we meet in the Gospels do come of as fundamentalists, it’s essential for us to remember that they are not representative of all Pharisees; in fact, if it weren’t for the Pharisees maintaining the traditions and customs, then Judaism would have disappeared after the destruction of the Temple in the year 70 AD, but thanks to the Pharisees the faith survived, and a new kind of Judaism was born:  rabbinic Judaism, which is the Judaism still practiced today.  We must not vilify the Pharisees as a whole simply because some were fundamentalists. 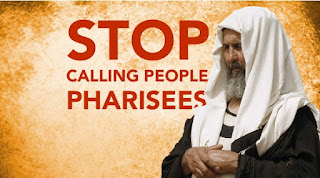 It isn't a bad word!

But what was it about Jesus that was so hard for those particular Pharisees to understand and deal with?  Chief among the issues on which Jesus and the Pharisees disagreed was tradition, how they viewed and practiced it, and how he called them out for their interpretation of it.  Take today’s story, for example.  A group of Pharisees and scribes are stunned that Jesus and his disciples eat without washing their hands, and they ask, rather sincerely, why Jesus and his disciples do not observe this tradition.  And Jesus responds by calling them hypocrites—which meant something different back then, the Greek word hupocrites simply means one who answers in a dialogue; that is, an actor, someone who is pretending or putting on a show.  They’re acting the part of being religious, and like Isaiah and the prophets of old, Jesus is calling these actors out for their phony righteousness. He then  goes on to say that they abandon the commandment of God and hold to human tradition.  How can this be?  The Torah explicitly says that one must wash ones hands before eating, right?  Well…no.  That’s not in Torah.  That’s not part of the Law that God gave to Moses to give to the people.  That is actually one of those traditions that grew out of the Law over time, and now it has become so commonplace that the Pharisees are treating a tradition as if it were part of God’s own law.  That question from Tevye—How did this tradition get started?—they can’t answer it because they have been playing the part of being religious for so long, elevating their traditions to a place of parity alongside the Torah, which ultimately undercuts the sacred Laws that they have, ironically, committed their lives to uphold.    It isn’t that Jesus believes washing ones hands before eating is pointless—I think we all can agree that being sanitary is important—rather, his frustration lies with people who are following their own traditions as though they were from God, as if there could not possibly be any other way to live, and that’s a recipe for trouble.

Such a mindset is certainly not the intellectual property of the Pharisees alone.  This is what happens in all fundamentalist communities, where the sayings and customs and traditions of that community become so commonplace over time that people forget where they came from at all.  When this happens such sayings and customs and traditions morph into something that resembles divine mandate.  We see this in every religion and every culture—from Muslim radicals in the Middle East to fundamentalist Buddhists in Myanmar, all of whom uphold ancient traditions while ignoring what their actual sacred texts and teachings say. And, of course, Christianity itself has fallen prey to this behavior.  Customs like forbidding clergy to marry and the exclusion of women from positions of leadership are just a couple of the so-called traditions of Christianity that are so old that people cannot remember a time when the church did not uphold them.  But if we ask Tevye’s question—How did these traditions get started?—and we dig deeper into them then we learn that these are not divine mandates but simply very old traditions.  The practice of forbidding priests to be married, for example, did not arise until the 12th century, when the church was faced with the difficult challenge of what to do with its property when a priest had a child—What if the child is not going to be a priest, then what happens to the property?  The solution was to forbid clergy from having children by keeping them from being married at all, a tradition that now is so old most think it’s been around since the foundation of the Church itself.  And as for the exclusion of women, it is clear from the writings of St. Paul that women like Phoebe, Prisca, and Thekla were all leaders in the early Church, but in the patriarchal Roman society, which Christianity was brought into in the 4th century, women were of little more regard than cattle, thus resulting in their voices being silenced and their witness being blotted out for so long that, again, such a tradition got conflated with divine Law.  It is this conflation, this clinging to traditions so tightly and placing them so high as to rival the Law of God, that Jesus undercuts.  He himself is not anti-tradition—keep in mind that he observes all of the Jewish holy days and does his rabbinical duty of teaching in the synagogues on the sabbath—but he does call out those who would be so devoted to tradition that they cannot even say how it got started, nor why it matters at all.  Traditions are good and joyful things, so long as we understand them and uphold them responsibly.  This is the conversation Jesus is having with the Pharisees, one that he invites us to have with our own traditions.

Spoiler alert for those who have not seen it, but things don’t end so well for Tevye, as the final moments of the story show him looking around and lamenting that his traditions could not save him and his town from inevitable change.  Traditions alone will not save us.  If we cling to them and stubbornly utter that famous line, “We’ve always done it this way!” then both we and our traditions will cease to be; for those are the last six words of a dying community—church or otherwise.  We must understand our traditions, ask where they came from, wonder why they matter and if they are still important.  But above all we must remember that traditions are not divine mandate, and that like all human-made things they can change and will eventually fade away, but God will not.  Faith will not.  This is what Jesus calls us all to hold onto more than anything:  our faith, not in tradition, but in a life-giving, liberating, and loving God.  Our traditions can point us to God, can shape and enhance our experiences of the holy, but they cannot be the things to which we cling so tightly that we forget where they come from or why they matter.  To do that is to just be playing a part, acting like righteous people.

Do you understand your traditions and why you do what you do?  As a Christian?  As an Episcopalian?  If not, that’s ok, but don't blindly follow them without trying to understand.  Don’t be afraid to ask those questions.  Finding the answers may be difficult, but we can do so if we remember that true faith lies not in how strictly we maintain and elevate our outward appearances and traditions but in how much our hearts and minds are fixed on the actual divine mandates to love God and one another.  For no matter what our tradition, that is Good News for all people in all places and at all times.