He Meets Us Where We Are

'When it was evening on that day, the first day of the week, and the doors of the house where the disciples had met were locked for fear of the religious authorities, Jesus came and stood among them and said, "Peace be with you." After he said this, he showed them his hands and his side. Then the disciples rejoiced when they saw the Lord. Jesus said to them again, "Peace be with you. As the Father has sent me, so I send you." When he had said this, he breathed on them and said to them, "Receive the Holy Spirit. If you forgive the sins of any, they are forgiven them; if you retain the sins of any, they are retained."
But Thomas (who was called the Twin), one of the twelve, was not with them when Jesus came. So the other disciples told him, "We have seen the Lord." But he said to them, "Unless I see the mark of the nails in his hands, and put my finger in the mark of the nails and my hand in his side, I will not believe."
A week later his disciples were again in the house, and Thomas was with them. Although the doors were shut, Jesus came and stood among them and said, "Peace be with you." Then he said to Thomas, "Put your finger here and see my hands. Reach out your hand and put it in my side. Do not doubt but believe." Thomas answered him, "My Lord and my God!" Jesus said to him, "Have you believed because you have seen me? Blessed are those who have not seen and yet have come to believe."
Now Jesus did many other signs in the presence of his disciples, which are not written in this book. But these are written so that you may come to believe that Jesus is the Messiah, the Son of God, and that through believing you may have life in his name.'
--John 20: 19-31 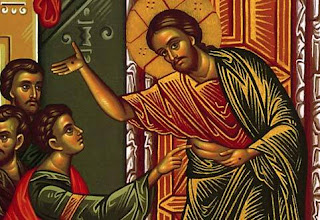 An Eastern icon of Jesus visiting the apostles.  Also Thomas.

Every single year we get the same Gospel story on the second Sunday of Easter.  We usually know it best as the Doubting Thomas Story. Preachers tend to focus on the character of Thomas the Apostle, who admittedly has historically been given a bad rep for his doubting.  In a normal year I would take the time to dig into the fact that Thomas’ doubts are not of Jesus, but rather of the other apostles—wouldn’t you doubt if someone told you they witnessed a miracle, only for their first response to be locking themselves away?  And I would remind all of us that Thomas’ nickname was Didymus, which means “The Twin,” because he holds in tension these two forces of doubt and faith that we have inaccurately been labeled as opposites but are rather two sides of the same coin.  And I’m sure I would pull out the quote from theologian Ann Lamont who once said that "the opposite of faith is not doubt but certainty."  That’s what I would do in a normal year, and I’ve talked about all of these factors relating to this Gospel before.  But this isn’t a normal year, and because of that there is something else that strikes me about this story, something we don’t often focus on, and that is the fact that Jesus comes to the apostles when they are locked up at home.

This is certainly something that every one of us can understand and relate to right now, isn’t it?  For my parish this marks the sixth week that we have been doing online services.  Only six!  To be honest I had started to lose count!  Our going outside has been limited to walking the dog, filming our Holy Week videos, and making one run to the grocery store. Besides that, we’ve been holed up, and I’m betting your situation isn’t much different.  Everything has come to a halt, and in a very odd way this has become our new normal:  quarantine, stay-at-home, isolation, social distancing, whatever you want to call it.  Easter has happened, and one week later we’re still stuck at home. We have a lot in common with the apostles!

Another thing we have in common with them is the feeling of fear.  Their fear was of a different nature—the text tells us that they were afraid of the religious authority figures. I even came across a humorous theory recently that was postulated by some scholars who have even wondered if they’re afraid of meeting this supposedly resurrected Jesus, fearful that he is a ghost come back to haunt his friends who abandoned him in his hour of need!  Arrest and apparitions are not what we are afraid of, I suspect, but we are absolutely dealing with our own fears at the present time.  Most are afraid of getting sick if we step outside our door, and because so little is actually known about COVID-19, those fears are rightfully warranted.  Some are afraid of what this means for our world, as daily we hear of violent and angry protests over stay-at-home mandates and other precautionary measures that are being taken.  Some are afraid that they’re not going to be able to pay their bills because they’ve lost their job, or if they’re still going in each day, they may be afraid that they’ll be the next to get laid off. Some, in the same vein, are afraid because they don’t have paid sick leave, yet they still risk going in because they can’t afford not to. Some are afraid of the loneliness that comes with social distancing, and the long-term effects that it can have Some are afraid of spouses or partners who have shown abusive tendencies in the past and who now never leave the house. Some are even afraid that others will mock or abuse them for being afraid.  We are all afraid, brothers and sisters, of a whole host of concerns, all of which are understandable.  Fear is all round us, as it was all around the apostles.

Doors closed out of fear, and yet that does not stop Jesus from showing up!  Amazing how that happens, isn’t it?  Just like Easter always manages to happen no matter what the circumstances, Jesus always manages to show up, even when people are held in the grip of disease, isolation, and fear.

Sadly, I have heard a number of Christian pastors over the last few weeks saying things like, “Jesus calls us not to be afraid, so we’re going to defy this evil virus and still gather for worship!”  Let me just say that that is not at all what I suspect Jesus wants us to do. Notice in the story that the apostles never actually leave the room.  Sure, they do eventually, but Jesus doesn’t show up and tell them to go running out into the streets to antagonize the religious authorities.  If they do that they’ll be arrested or worse.  They can’t go outside because it is literally unsafe to do so, and because of that Jesus comes to them.  Jesus meets them exactly where they are, even in the midst of their fear.

This, brothers and sisters, is the good news that we need to hear, not that we should throw Jesus on as some kind of shield and rush back to mass gatherings just because we’re getting frustrated with our current predicament.  The living Christ has a way of still coming to us and abiding with us, even when it is impossible for us to move.

We are an Easter people.  We live in the constant reality of Resurrection.  Christ IS alive, present tense!  Easter is not just a moment in time that we remember, but it is an ever-present state of being.  And if Easter is real, and Christ is alive, then that means nothing in this world can stop Jesus from finding us exactly where we are.  Nothing can stop Jesus from coming into our homes, abiding with us in love, strengthening us in our prayer and study and companionship with those we love.  This does not magically mean that our fears will disappear, but it does mean that Jesus will stay with us through those fears, as he did with the apostles.

The fears that we all experience right now are entirely real and valid.  To be honest, we don’t hear that enough.  We need to be reminded that our feelings matter and are legitimate.  I believe that by meeting them where they are Jesus is legitimizing the feelings of the apostles.  Yes, he cuts through that fear and brings them hope, but he does not encourage them to do anything that is reckless or harmful.

We must remember that Jesus meets us where we are, and that the way we handle our fear is not by denying it and carelessly doing something that would put ourselves or others at risk, but by abiding in the presence of the one who comes to us, even when we are locked away with fear in our hearts.  It is his perfect love that casts out all our fears and gives us hope for a brighter future.

So may you abide in the presence of Jesus this week.  Know that there is nothing that will hold his love back from coming into your life.  His love will meet you right where you are, without shame or judgment, and will stay with you through your moments of fear.
Posted by Joe Mitchell at 10:02 AM No comments:

This Is Our Story

My favorite service of the whole Christian year is the Great Vigil of Easter.  It was incredibly difficlut to not be with the people of my parish as that holy night ushered in the first light of Easter. Most years I tend to focus on the night itself, on the baptisms that we often celebrate, or the unique quality of the liturgy, which starts in darkness and concludes in the light.  This year, however, as my wife Kristen and I celebrated our own version of an Easter Vigil liturgy, I chose to do something different and focused my message on the five pieces from the Hebrew Scriptures that we had read earlier.  These came from:
The full video of the liturgy can be found below.  The readings begin at 6:07, with my sermon starting at 42:02.  This blog entry contains the text from that sermon.  Blessed Easter, everyone!  Alleluia!  Christ is risen!